What is the Difference Between Assault and Battery?

Oftentimes, the two are paired together, however, there are significant differences as well as potential charges and penalties between an assault charge and a battery charge. 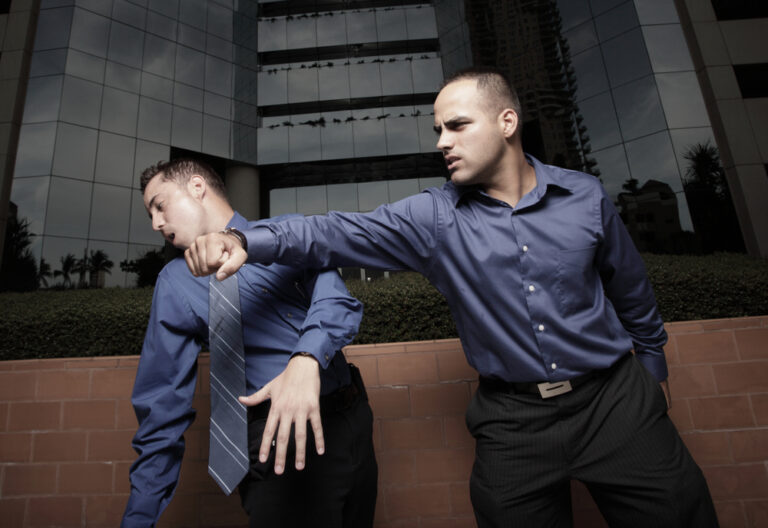 According to Florida Statute 784.011, “assault is an intentional, unlawful threat by word or action to do violence to the person of another, coupled with an apparent ability to do so, and doing some act which creates a well-founded fear in such other person that such violence is imminent.” Assault does not involve physical contact.

Here is a scenario with an example of assault:
Two men are at a bar. The one man gets upset with the other man and raises his fist up to him and threatens him. The other man is afraid of getting hit and leaves the area. This is a threat but no actual violence so is labeled assault. Assault charges are second-degree misdemeanors in Florida. The penalty for an assault charge could be a fine up to $500.00 and up to 60 days in jail.

Aggravated assault, according to the Florida Statutes 784.021, is “an assault with a deadly weapon without intent to kill or with an intent to commit a felony.” This charge is a third-degree felony and could result in up to 5 years in prison with a fine of up to $5,000.00.
Battery, as defined by Florida Statutes 784.03, is “actually and intentionally touching or striking another person against the will of the other or intentionally causing bodily harm to another person.” Basically, one person made physical contact with another person.

Aggravated battery, according to Florida Statute 784.045, is “where a person commits aggravated battery who, in committing battery: intentionally or knowingly causes great bodily harm, permanent disability, or permanent disfigurement; or uses a deadly weapon. A person commits aggravated battery if the person who was the victim of the battery was pregnant at the time of the offense and the offender knew or should have known that the victim was pregnant.” This charge is a second-degree felony and could result in up to 15 years in prison with a maximum fine of $10,000.00.

An example of battery is:
Two men are at a bar. The one man gets upset with the other man and punches him in the face. Since the first man touched the other man and caused physical harm this is battery. In Florida, battery is charged as a first-degree misdemeanor. The penalty for a battery charge could be a fine up to $5,000.00 and up to a year in jail.

In Florida, charges can increase for assault and battery if the victims fall into one of these categories (classes of vulnerability):
• Police
• School teachers
• Health care workers
• Corrections staff
• Emergency responders

Charges for both assault and battery vary depending on the level of harm.

Can you face charges of both assault and battery?
The answer is yes.

If you or a loved one are facing charges of assault, battery, or assault and battery and needs a bail bond agency, please call us at 407-841-3646. We are located in the Cox Plaza at 2911 39th Street, Suite 300, in Orlando, Florida. We are available 24 hours a day, 7 days a week, and all year long to assist you with the bail bond process. Our staff can also explain more about the criminal justice system. If you are a first-time offender, being arrested can be both confusing and stressful. Our experienced bail bondsmen offer fast bail, we are the bondsmen on 39th! Contact us today!